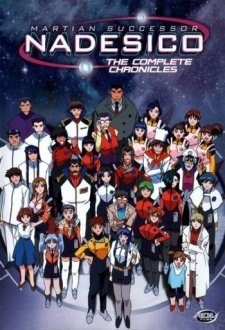 Смотреть онлайн
Описание
Akito doesn't want to fight. Despite a childhood spent on the anime Gekiganger 3, a Mecha show, he'd rather cook than pilot a Mecha. Fate intervenes when his home on Mars is destroyed, and he is transported instantly to the Earth, mysteriously. He has questions no one can answer fully, but follows a girl from a chance meeting in hopes to discover any. The girl, Yurika, is captain of the private battleship Nadesico, and in order to follow her, he enlists as their cook. Possessing the nanite implants that allow to control mechas, he's a handy backup pilot for the mechas of the Nadesico. He joins a crew bent on avenging Mars that seems to be composed of only misfits, otakus, and ditzes; however, in reality, they are handpicked experts. They take their own private war back to Mars to face the harsh reality that life may not always be like a Giant Mecha series.
ANN
развернуть...
Похожее